Brit Publisher Felix Dennis died on 22 June. He excelled at publishing and living.
So we dip into  the Magazine Retailer archive once again. On 2 December, 2000, Dennis gave a remarkable talk to the American Society of Magazine Editors. He lobbed some disturbing (to the audience) journalism 101 truths to explain Maxim magazine's then success at both  subscription and single copy (a/k/a retail) sales.

On December 2, Felix Dennis of Dennis Publishing was the luncheon "entertainment" at a meeting of the American Society of Magazine Editors (ASME). His stateside publications – Maxim and Stuff – are relative newcomers to the North American scene. Their verve and, even more importantly, their success have made Dennis Publishing a player in the new world market. In a brash, droll and informative talk, he told the assembled New York editors about the power of single copy. The crème de la of prime time editing understood this intellectually and many had personal experience with the concept.
He cited some delightful statistics about Maxim's growth. The print run jumped from 175,000 copies to 2,700,000 in 25 issues. An MRI study revealed the average Maxim reader is a 30-year-old male with a median household income of $62,000 a year. He reported that the October 1999 issue "brought in 55,000 new subscription blow-in cards." Then he topped that nugget with the news that Maxim's newsstand percentage sale is currently 73% nationwide."
And then he shared his company's authentic success secrets. Staffing levels are lower than the norm which leads to "an environment where creativity and risk-taking dominates our company's culture." He also told the New York editors that "the cult of the celebrity editor" has no adherents at Dennis Publishing.
"The concept of one man or one woman," said Dennis, "as the big cheese, the font of all wisdom, is, in my judgement utter baloney. It leads to self-indulgence and a pomposity, which creeps inevitably onto the pages of the magazine."
He said that his company "worships at the altar of the reader" and that "the advertising community is a welcome and essential element of our congregation; but they are not invited to conduct the service or choose the hymns."
Dennis then gave a breakdown of Maxim's editorial content by category and confided that his company "arrived at these allocations of editorial content by the astonishing methodology of asking our readers what they wanted . . . and then supplying it." In looking at other magazines he pointed to "a gap in real affinity between reader and content" and observed that the "paid circulations of hundreds of magazines have been declining for years." To attract subscribers, American magazines have, according to Dennis, have employed such "promotional smoke and mirrors" as "junk mail drops, promotional giveaways and stamp sheets."
He suggested another way: "What if magazine subscriptions could be driven primarily by newsstand sales, and newsstand sales driven by editorial that connected with the reader." Dennis acknowledges that he does do some direct mail and that he has a three-person circulation department.
"I believe," said Dennis, "that the real circulation department at Maxim is called 'the editorial team." And that is the secret of reader-driven success."
Posted by Norman Schreiber at 8:41 AM No comments:

Yes, this event triggers the now traditional print v. digital discourse ritual. Ah, what a glorious, stirring, and even urgent dialog that is. 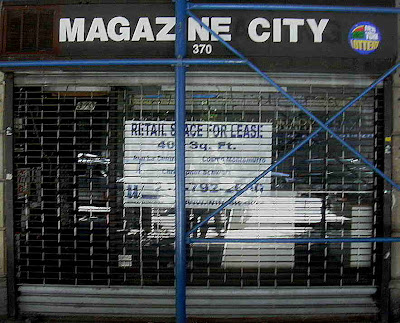 .
But –er- there’s a larger issue: namely, do publishers know how to sell magazines to consumers?
The asteroid that struck the newsstand was not the digital age. It was the great wholesaler consolidation, triggered by supermarket chains in 1995. Baird Davis explains it well in Audience Development.
“…in 1995,” writes Davis, “Safeway challenged wholesaler’s geographic control by putting their nationwide magazine contract up for bid. Their successful effort, in effect, broke the concept of local wholesaler autonomy. It unleashed a massive change in magazine channel operations. Over the next five years the diverse magazine wholesaling business rapidly consolidated. The number of independent wholesalers declined from over 300 to 4 major wholesalers controlling over 90 percent of the business.”
While the consolidation was a shock to publishers, it was a horror to wholesalers. Quite simply it cost them too much to service their retailer customers with poorly performing magazine product.
“In the process,” Davis notes, “the economics of the business were dramatically transformed. The magazine wholesaling industry, in a few short years, went from being a group of insanely profitable locally-owned businesses to a handful of mega-sized financially fragile regional businesses.”

On September 28, the softspoken Joel Anderson of Anderson News stood at the podium of a meeting room in the Manhattan offices of the Magazine Publishers of America He was there to tell MPA members and other interested parties about his company's new two-tier approach to the distribution of magazines. The two tines are Anderson News and a new division called National Publications Center (NPC). Publishers are understandably worried about being two-tine losers and so he also was there to listen to the publishers and answer their questions. He might as well have begun his talk by saying, "We mean you no harm."
The wholesale distribution of magazines suffers, according to Anderson, from the imbalance that comes from too many magazine titles and not enough display space. He likened it to trying to pour six gallons of water into a five-gallon bucket. Moreover, Anderson noted that the low sellthrough of so many titles have made them too costly for his company to carry.  He reminded the attendees that, when the recent great consolidation played saloogi with wholesaler margins, Anderson News enacted a policy that would in effect have publishers of particularly inefficient titles share the economic burden. Anderson indicated that this idea did not enchant publishers all that much and, although it still was Anderson policy it hasn't been actively pursued.
The two-tier Anderson solution calls for the distribution of the approximately 2500 of the most "productive" magazines by Anderson News to most of the nearly 42,000 locations the company services. The new NPC division, based in LaVergne (Tenn.), specifically will handle approximately 1500 titles that are not mass market magazines. These will go to some or all of 2100 selected stores. The essential criteria are national and regional performance.
The NPC stores are in a variety of channels and communities. They tend to be in major markets and have a lot of display space. So, the NPC titles will go from the printer to LaVergne. The assortments will be prepared for the 2100 stores, and then shipped to the various Anderson distribution centers. These packages will be combined with the other Anderson News allotments going to the 2100 stores. The Anderson field staffs will take the combined packages and service their accounts for both delivery and pick-up. Publishers of NPC titles will pay some sort of NPC charge. Anderson would not discuss pricing at this meeting.
The intentions are pretty clear. Unshackle the potential of the better-selling magazines. Make the less productive magazines earn their keeps. And keep the process seamless for retailers who only will be dealing with Anderson field personnel. Anderson suggested that this approach will reward retailers through efficiencies and profits that come from better use of display space and personnel time.
Anderson offered publishers some upbeat predictions, as well. He said they suffer from compressed on-sale cycles, the reality that some titles are immediately returned or don't even get to the stores, and the expensive waste that comes from 75-80% of a print run never getting sold. In what some saw as a kind of doublethink, he said that the NPC approach saves the publishers money  – when compared to the surcharge system Anderson previously tried to install.
The ensuing publisher questions and polite but firm Anderson answers emphasized that the new system definitely and understandably is a distributor-oriented solution. This Anderson approach focuses on pick-and-pack productivity and limits delivery of less profitable publications to an extremely finite but targeted and, publishers hope, welcoming universe.
Yes, specific retailer/publisher promotional arrangements will be honored even if the arrangement is between an Anderson customer and a NPC publisher.
No, a publisher of eight Anderson titles and two NPC titles cannot get Anderson to carry the two NPC titles.
Yes, a national magazine that has regional editions and regional covers may encounter some difficulty.
No, a NPC customer that sells out probably won't have time to replenish.
No, the fact that a publication makes money for its publisher has no bearing on whether it's profitable for Anderson.
As for new titles, they will be reviewed on a case by case basis.
And so on.
Clearly the introduction of RPC is not a publisher solution to what Anderson characterizes as imbalance. Clutter has previously been defined on these pages as a publisher's term for another publisher's product. Nor is the Anderson initiative really a retailer solution that should take into account such items as store-specific data, cross merchandizing support, and characteristics unique to each specific store and its positioning. .
In addition to concerns and issues raised at the Anderson MPA meeting, other thoughts are worth pondering. For one thing, there's the basic rule that marketers don't often discuss: Customers don't necessarily do what they're supposed to. We wonder if independent stores will find it easier to offer a wider selection of titles than their chain store competitors. Will retailers be able to respond to consumer demand and demonstrate the kind of differentiation needed for quality marketing? Direct distributors are already looking to line up additional opportunities. And we wonder if Anderson's actions will right the "imbalance" or lead to a heightened caste system among publishers and Balkanization of retail channels. Or do both.
Back at the MPA, the last question for Joel Anderson came from a publisher who felt small publishers were being put at a particular disadvantage. He wondered about where larger publishers were in all of this.
Anderson remained silent for a moment and then advised the questioner and others in the room to listen to the sound of the other shoe dropping.

Posted by Norman Schreiber at 7:36 PM No comments: